Why we are afraid of radiation

Most people are deathly afraid of radiation: for decades we’ve been told that radiation causes cancer.  This was the initial conclusion when researchers first noted that radiation can cause cells to mutate and become cancerous.  However, more recent scientific understandings of how our bodies deal with radiation have begun to refine this long-held belief in an intriguing way.  The sun, as our nearest star,  “bathes Earth in a steady stream of energetic particles, magnetic fields, and radiation” that stimulates our atmosphere, provides light and heat, powers solar panels, and even light up the night sky with aurora borealis.  In fact, there is so much background radiation in our environment that we literally swim in showers of solar and cosmic rays, sprinkled with low-dose radiation baths from minerals and elements found in the earth that exist in our building materials, our food and our drink.  Even the carbon in our own bodies is slightly radioactive.  Now scientists realize that low levels of radiation are harmless and, in fact, we may actually need a certain amount of radiation.  One could say that our fear of radiation would be like a fish being afraid of water. 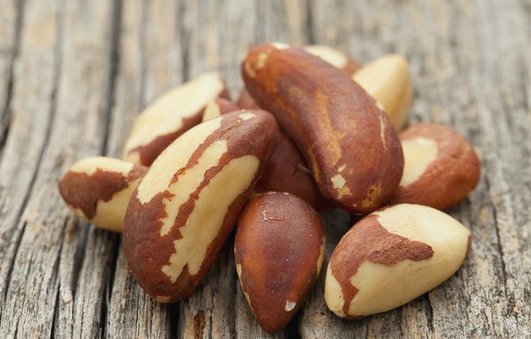 It turns out, our environment has so much radiation, it is difficult to find any place to test what it is like not to have radiation exposure. Not only do we receive doses of radiation from the sun, from cosmic rays, from minerals in the ground, we get steady exposure from many of the common “healthy” foods we eat. Spinach, Lima beans, Brazil nuts, bananas, meat, avocados and even beer emit radiation from elements that our bodies need, including Potassium, Radium and Radon.  We, in fact, are made of carbon and all carbon is very slightly radioactive (which is how they do carbon-dating on ancient artifacts).  The reality is that our cells get bombarded with radiation from within and without much of the time, yet we don’t all get cancer.  It seems that we humans and all species of plants and animals have evolved mechanisms for protecting our cells from the effects of radiation.  When bombarded cells are damaged, this stimulates a set of biological responses which collectively work to contain and eject damaged material. This process is referred to as “hormesis,” and it can effectively undo damage from environmental agents. “These are normal metabolic processes which repair or remove the damaged cells, conferring on the organism even greater ability to defend against subsequent damage.”  The net effect of low-level radiation in our environment may well be that we don’t growth well without it. 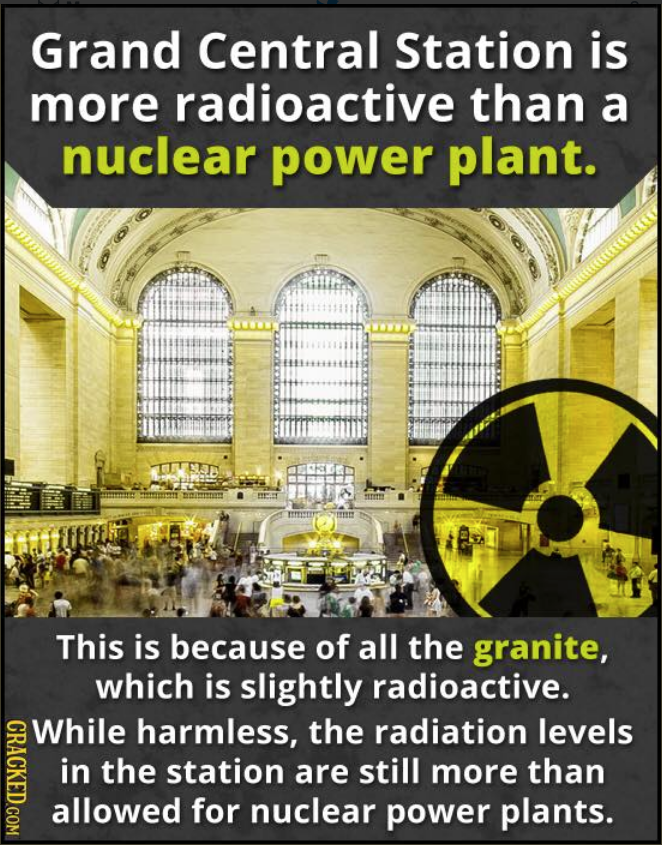 While it might frighten you to know that you are living surrounded by environmental radiation, Milt Levenson, a former neighbor who passed away earlier this year, and a former member of the Manhattan Project team who then worked in nuclear safety, helped us to see that radiation follows other natural environmental phenomena of our environment like temperature and moisture. Organisms on the earth can’t live with none and can’t live with too much but in between there is a very wide and comfortable range — the sweet spot — in which life carries on quite happily.  It appears from subsequent studies that moderate increases in radiation dosages (such as moving to Denver) are matched by increases in our body’s hormesis rate, the way running on a regular basis forces the body’s aerobic system to more efficiently process oxygen than is needed by walking.  Clearly, there isn’t a higher rate of cancer in Denver than in places at lower altitudes, so healthy organisms make these adjustments without knowing it.

Most of the radiation we are exposed to we cannot control but neither is it generally harmful. Extremely large and/or rapid changes in exposure to radiation can still kill us but, by and large, these do not happen, even in the event of bad nuclear melt-downs.  What we can control and what is harmful is exaggerated fears of radiation that affect our behavior in ways that result in more injury or damage than the radiation itself.  It turns out that, while nearly 16,000 people were swept away by the massive tsunami which pummeled Fukushima, not one person died from actual cellular damage caused by excessive radiation exposure when three of Fukushima’s reactors subsequently melted down.  But there were considerable injuries and deaths suffered from heart attacks, trampling and accidents caused by undue panic among those evacuating the area.

Fear of radiation can do more damage than radiation itself

The University of California has posted an information page called “What to know before you go bananas about radiation.” They have created a very clear infographic that shows dosages for a wide range of radiation sources in terms of bananas.  Before you decline to get your x-ray (which can result in a greater chance of dying from an actual cause) check out this graphic to put your risks into perspective.  Similarly, many climate advocates are worried that society’s extremely unrealistic fears of nuclear power (some consider it“superstition” because it is based upon deliberate exaggerations intended to induce rejection) prevent fact-based policies such as those recommended by some of our foremost climate scientists.  In the aftermath of the Fukushima accident, it has become clear that unrealistic fears of radiation caused excessive panic during the evacuation, which itself was a cause of more human suffering and even deaths than the radiation itself would have caused.  Robin Harding, reviewing the amazing conclusions becoming increasingly apparent, wrote in Fukushima nuclear disaster: did the evacuation raise the death toll?:

At the height of the crisis there were fears of much worse contamination. The question is rather whether people should have been kept away for weeks, not years. “With hindsight, we can say the evacuation was a mistake,” says Philip Thomas, a professor of risk management at the University of Bristol and leader of a recent research project on nuclear accidents. “We would have recommended that nobody be evacuated.” 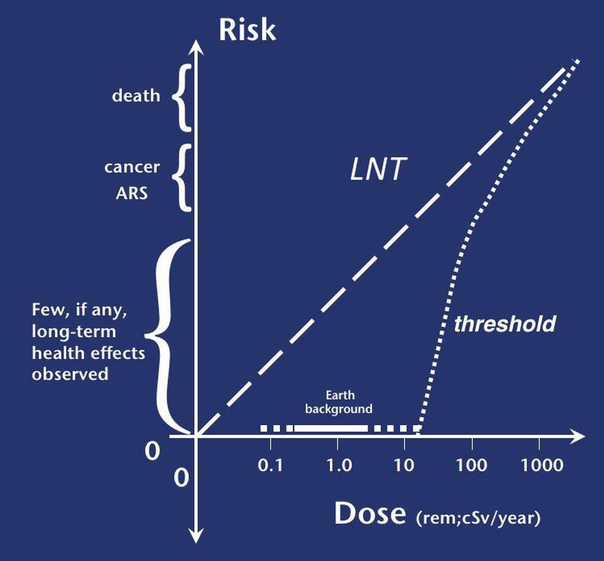 Scientists meeting at the 63rd Annual Meeting of the Health Physics Society, which is a meeting of the group of scientists most responsible for protecting Americans from the harms of radiation, estimated that the actual costs of excessive regulations protecting populations from levels of radiation that are not harmful have been calculated as costing $500 billion for America, and over a trillion dollars for the world.  This in itself causes more harm than good, as these hundreds of billions of dollars could be used to save actual lives.

Ultimately, whether or not humanity will benefit from nuclear’s clean energy and its ability to prevent deaths caused by fossil fuel’s toxic air pollution and climate change may hinge considerably on whether people are willing to adjust their fear response to radiation.  The original theory called the Linear No-Threshold theory, which concluded that no amount of radiation no matter how low was safe, has been fully debunked by subsequent studies, in large part as a result of the lack of radiation-related deaths that resulted from Chernobyl and Fukushima.  Unfortunately, as reported by James Conca, in his insightful review of the proceedings of the HPS, the fact that the leading scientists now agree that LNT is not the appropriate standard this doesn’t guarantee that people will finally come to accept that low-level radiation exposure is not dangerous and decide that we should invest our funds in things that can protect health and save lives — like nuclear power as a way to reduce our dependence upon fossil fuels — rather than spending money to protect ourselves from insignificant amounts of radiation that don’t hurt us at all.

ScienceDirect, From Muller to mechanism: How LNT became the default model for cancer risk assessment, by Edward J. Calabrese, submitted for acceptance May, 2018.

IAEA, Radiation in Everyday Life, with authoritative information about:  Types of Radiation | Radiation Dose | Radiation Protection | At What Level is Radiation Harmful? | Risks and Benefits

Scientific American, Nuclear power may have saved 1.8 million lives otherwise lost to fossil fuels, may save up to 7 million more, by Ashutosh Jogalekar, April 2, 2013.

Sage Journals:  It Is Time to Move Beyond the Linear No-Threshold Theory for Low-Dose Radiation Protection, by John J. Cardarelli and Brant A. Ulsh, July 1, 2018

About the Author: Valerie Gardner

Valerie Gardner has focused on finding scalable ways for individuals, organizations and governments to respond to climate change since 2005. She learned the basics by creating environmental educational programs for schools, then broadening her purview to create programming for area towns starting in 2007. In 2010, she began exploring how to decrease carbon emission exposure from investment portfolios and developed a "post-carbon-priced" portfolio strategy. Her research into clean energy solutions and solutions at scale led her to nuclear power, where she discovered the industry's impressive technological performance and a rather large but under-the-radar pronuclear community. She thought more environmentalists needed to get to #KnowNukes better. In 2016, she co-founded the Climate Coalition with a diverse and bipartisan team of technologists, environmentalists, climate activists and investors who recognized that without nuclear's clean baseload power, humanity will remain dependent upon fossil fuels—especially natural gas—for reliable grids for far too long. The Climate Coalition is working to broaden awareness of this problem and the increasingly urgent need for the environmental movement to finally acknowledge the immense benefits of nuclear energy.